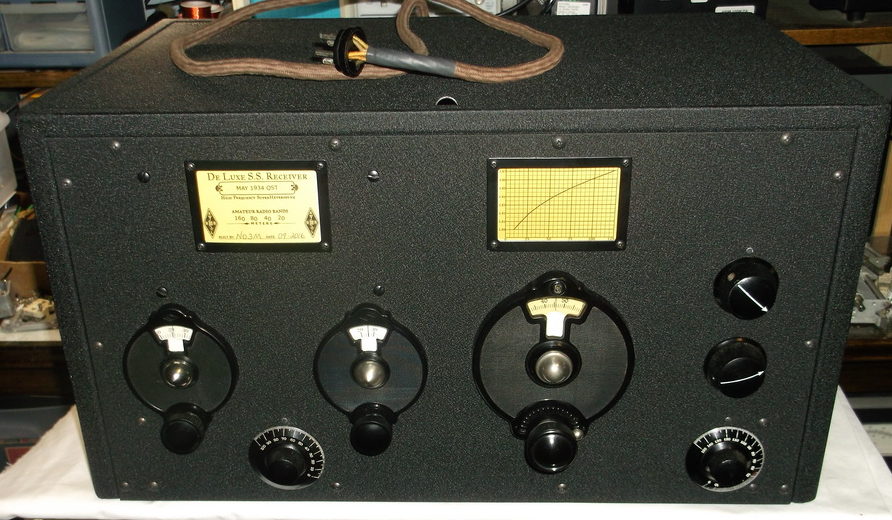 After about three-weeks of construction, the time had finally arrived to test the 1934 QST De Luxe Superhet Receiver on the air!  With power supplied, tubes lit, dial indicator lamps lit, and coils installed, I plugged in the louspeaker and connected the antenna lead (active vertical in backyard) and began tuning around the 160M band to find that “first” on-air signal…

The moment finally came, and none other than W1AW came booming through the loudspeaker!!  The note was steady and pure, confirming that the HFO and BFO were stable.  There was no lack of gain, plenty of volume.  I played around with the controls quite a bit getting myself acclimated with the effects of the adjustments, including BFO, crystal filter selectivity and phasing, peaking the RF stages, etc.  Next, I dialed in maximum selectivity, tuned to the other side of zero-beat and adjusted the crystal filter phasing for minimal signal, then tuned back to the main signal.  An incredible peak in amplitude could be heard when tuned to the crystal filter frequency, ie. “on the nose”.  Single signal behavior was very impressive.

The receiver appears to be a winner!  While it may not be a substitute for a full-featured modern receiver, I think it will hold it’s own even in moderately crowded conditions like Field Day.  At least it doesn’t seem any worse off than my National HRO-5TA1.

Below are a couple videos demonstrating reception of W1AW on 160M:

Some photos of the receiver in it’s final form:

Previous posts of receiver construction from start to finish: